The last big one!

It's Friday night and tomorrow will be the start of the last long "runs" in preparation for the South Downs Way 50 miler in April.

The forecast currently is light to heavy snow depending on what website you look at but to be honest the only thing I'm worried about is getting to the start line.
Unlike road races like this weekends Brentwood Half Marathon, the two races I have scheduled are true off-road classics and will take place no matter how poor the conditions are, in fact poorer the better (in their opinion). The Orion 15 on Saturday was described to me as the nearest thing to a fell race in the our local area based in the not so flat Epping Forest and this will be followed on Sunday by the Sevenoaks Circular LDWA event which is a 30 miler in North Kent taking in some of the "slopes" of the North Downs etc. This back-to-back plan may sound harsh but it's supposed to replicate the effects of long distance ultras where you need to be able to operate when the body is already fatigued.

Since running the Reading Half Marathon last weekend I've only been running a couple of times. One short run with Annie our Labradoodle and yesterday at the running club where it was efforts. I don't usually do this type of training and I know I should do them more often but mental note to everyone out there.... Efforts and Flip Flops don't mix!

I've just finished packing for both events and I'll be taking no chances with the weather and its warm kit all the way! Tomorrow is more about speed where Sunday is all about being out in the wet, wind and snow for the whole day.

Footwear choices are for Orion will be Walsh PB ultra's as I'll be looking for max grip on the slopes and mud in Epping and for the ultra on Sunday depending on the amount of snow currently looks like New Balance MT110's.

Apart from keeping warm the next essential choice is fuelling. This isn't so important during tomorrow's run and I'll be just using gels but the most important factor is recovery so I'll be downing loads of the Yazoo chocolate milkshake (currently half price at Tesco!) post-race.

Fuelling on Sunday is more important with gels and Nuun hydration tabs but I've also packed some normal food including some mini pepperami and cereal bars which should be enough as the checkpoints on LWDA (Long Distance Walking Association) are legendary for their supplies.

Well I'll be off now and will add to this thread post-Orion tomorrow. Fingers crossed.

Saturday 7am and the snow has arrived as promised. As I said I'm pretty sure Orion will be on but I'm a little worried about getting there. 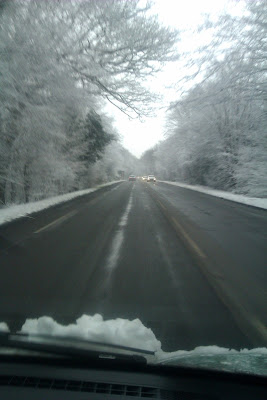 The Road to Orion

Well I decided that the Orion Running Club's promise that this race ALWAYS takes place was worth making the effort to get there and and set off to Epping Forest. The snow was coming down pretty hard by now and the M25 was entertaining. Eventually I got to the place defined by the start nav as my destination.
I grabbed my bag and made my way to up the road in what can only be described as arctic conditions. I followed a couple of people that looked like they were heading the same place as me and we found the venue.

Orion's club building was small but had decent facilities and I was soon changed and ready for the start. I ran into a few other runners from my club and they told me some horror stories from previous years, the main one was how last year it was 21 degrees and too hot, well today I didn't think heat stroke was going to be an issue as it was sub-zero and snow on the ground, Global Warming anyone?

I said that I was going to be taking it easy as this was only meant to be a training run for me but I was then reminded that there was cut-off between the 8 and 9 mile point. With tough conditions under foot and the well known terrain of Epping, this was going to be no "walk in the park".

As soon as we started I knew I was going to find it tough. The 300 places on offer for the race weren't full as many people decided to stay at home and within 100m I was thinking maybe they chose wisely. Although flat, the start was a mixture of thick deep mud and water. This combined with the fact that every puddle was actually a potential flooded ditch made things entertaining.

Back to the subject of the dreaded cut-off. I needed to average sub 10 min miles and normally this isn't an issue but these conditions were going to be a test as I didn't want to over do it as I needed to save something for the race tomorrow but didn't really want to take the "walk of shame" to an early shower (well maybe I did?)

The first few miles were difficult as the ground continued to slow me down and at times you couldn't physically go any faster if you wanted to as there was generally one "racing line" and you had to follow the person in front.

Eventually the course entered the hills of the forest and the highest point of Epping overlooking London and the pace slowed. I pushed as hard as I could but had to walk the short steep hills and I was starting to get concerned, this was one hard race. I approached the 8 miles point and passed a drinks station, I was inside the allotted time and one of the other runners confirmed that was the cut-off point.

I'd made it and backed off the pace so I could save something for tomorrow. At the top of the next hill I asked the marshal to confirm that the cut-off had passed... "no not yet" was their response! Crap! I looked at the watch and I was 9:59 minute miling now and I risked being pulled out of the race. I was now at the 10 mile point and it was then that I realised I'd been had. The point I'd passed earlier was correct but the marshals were trying to get people to keep pushing, oh well.
Finally I was within a mile of the finish. I pushed a little harder now as I knew I was close to home and had lot's still left in the tank and finished in 2 hrs 27 by far the hardest 15 mile race I'd run.

I have to admit Orion did a great job hosting the event and we all event got a glass of bubbly as we finished.... very nice :)

Well lets we how tomorrow goes?