"Fig rolls – sustenance of kings!" – Mr Andy Hind (a runner and the front end of Dobbin)

My training partners opinion of the powers of figs...!

Below is part of an email conversation I had with Andy on last weekends ultra training run and fuelling experiments!

I've not included Andy's input as I've not asked him if I can use it but here's what I had to say and you can work out what's happening from that I guess......? I've left it as is so hope it makes kind of sense, I have added some text just to give you a little more background.

"Agreed! I think we’ve stumbled onto a gem here…. I think but I need to mix them with something else though but I did the whole weekend on nothing but them and was no worse than previously (I did a half marathon Sat and 30 miles Sunday)."

"I did have some of the worse wind EVER Sunday afternoon but put that down to not “going” early in the day (sorry)."

"I’m going to try and bin gels for good now as I’m literally sick of them (plus they cost a packet if you use loads)."

"I think I’ve also decided to stop using coconut water during running but will save it for pre or post event as again I get sick of it on long runs."

"Post event I just eat LOADS. Full roast dinner and just kept drinking for the first few hours. What I did notice was that I wasn’t as dehydrated as I have been but I probably drunk a lot less than normal for that distance?"

"I drunk 500ml of water with a single Nuun tablet for the first 15 miles then another bottle for the last 15 (so carried 3ltr’s extra in a bladder for nothing). I normally refill a 750ml bottle with a single tablet (should have really use 1.5 tabs) every aid station which in an ultra will be between 5-12 miles."

"I’ve find the above very interesting as how can I drink less but be better off? One of the main differences is recently using coconut water so I’ll stop that during the race plus in long runs cannot refill from aid stations so Nuun from now on for me. I am going to try plain concentrate orange squash next time maybe with some added salt tabs as I’m trying to stop using specific sports products."

"I had slight trouble sleeping Sunday night but I normally do post big run as the body is run down but muscle pain wise I’m just a little bit sore but cycled the 24 mile commute today in record time."

I think I'm going to stop using the GU gels I've had for now and see how the figs work out. 64p a packet at Tesco means I've a kitchen cupboard full of the things! If it doesn't work I could always build a mini fort out of them...

I compared my usual gels with the power of figs and approx. two rolls have the same amount of carbs as the gel pack. I normally consume one gel every 5 miles so simple, I needed to carry roughly two fig rolls for this distance.

The only difference in nutrition stats were the gels contained a larger amount of calories but as I was only really interested in carbs as I could take on calories via other means, I was quite happy. 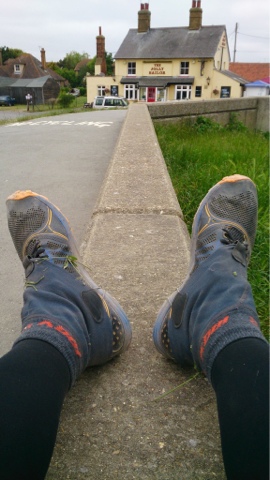