I'm writing this the morning after the night before when I DNF'd from the 2013 Centurion Running - Piece Of String Ultra Marathon Fun Run.

First off, what is PoS? The idea for the event comes care of Race Director James Adams. The main concept is you start to run just like any other race but you have no idea of when the finish will happen.

As mad as it sounds, this unusual scenario is for many is the ultimate in difficult adventure running. 17 people are hand picked to take part via yet again an unconventional process of submitting your most depressing photo of yourself, see below.

This was the second year I'd sent a photo and for the second year running I had been placed on the reserve list (an achievement in itself). I'd finished my last race of the year at Beachy Head about a month ago and had not done any serious distance since.

I was enjoying the break when I received a message that a place had become available in PoS if I wanted it? Was I ready? Not really... What was I going to say? "Hell yes!" I replied as I wanted to be one of their "chosen idiots".

Well that was a couple of weeks ago and really too late to do any significant training so I just kept on ticking over and this wasn't improved by the fact a week before the start of the race I seemed to pick up a stomach bug that left me with no energy, not ideal!

I'd decided that I'd see how I felt closer to the event but even then I knew I'd probably be at the start line no mater what! It was Thursday, the day before the off and after a week of sickness was finally starting to feeling better so game on.

I put the finishing touches to my kit and visited the local supermarket stocking up on the usual supply of scotch eggs, peanuts, chocolate and drinks. I also made a pit stop this time at the post office. I'd already paid this year's £20 entry fee but in true PoS tradition all entrants also had to supply a Postal Order for £1:37 made payable to the RSPCA!

Even the small fact that the race started 10am on a Friday meaning I had to take a day off work made it seem special. Almost professional-like hey Darren Coates!

Morning of the run and I loaded my drop bag and kit into the car and started the 100 mile journey to Streatley Berkshire thinking I might as well run back as that could be the kind of distances covered! As I turned off the M4 near Reading I felt like fate was looking out for me as I passed a small village called Basildon!

I got to the start with plenty of time to spare and it wad great to see the familiar faces of Nici Griffin and Centurion head honcho James Elson. After exchanging greetings I was asked if I was nervous? Actually I realised I wasn't... Strange!

With a few last minutes checks all the participants gathered and it was as usual great to put some faces to names in including some of the cream of UK Ultra Running. It was also nice to see local girl Jackie Stretton and her other half Justin again.

We were minutes from the start and we still had no idea where we were heading? Race RD James was carrying an old battered suitcase from which he produced a small round container which actually looked like a bejazzlled pot noodle! James then announced that as I was the only person that hadn't paid to run then I would have to chose the distance.

I'd sent my cheque ages ago but went along slightly confused. He removed the lid to reveal a series of tags numbered 1 to 5 which I guessed represented distances. I pulled tag 3 because as De La Soul said "3 was the magic number" and the tag was attached to... Yes you guessed it, a piece of string!

With that I'd chosen our fate. James Elson handed us Thames Path maps telling us to head North and then we were being counted down and we were racing! I stuck with the main pack as we left the start and headed down the narrow lane which led to the River Thames.

This was now the time for the fun run to make its first move. We'd only run 100m and were greeted by a minibus! We were told to climb on board and soon we were all being driven around the back lanes of Berkshire all slightly confused. 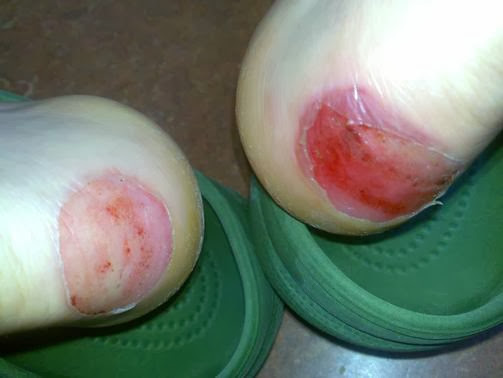