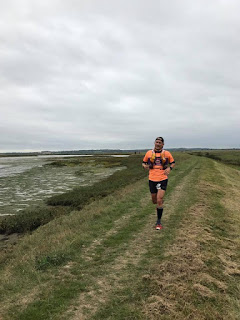 Things started well as the mayor set us off and we sped along the sea wall. Things were going well and I was in the lead pack somehow.  Reality kicked in immediately as a reminder that I should know my place as I tripped on a stone and face planted an inch away from a rock that could have easily split my head like a coconut!

So what did I do next? Slow down and settle back into the pack for the long game? Noooooooo way. I decided everyone was going too slow so I'd push on. The talk in the group was we were going too fast but I honestly thought they were bluffing and just waiting to make their moves so as we approached CP1 as Mr Saltmarsh Colin Harper joked to me "you'd better be first so we don't hold you up!" I made my move.

I think everyone must of thought it was a bit of a laugh as I sped off (and I think I did too) but then I thought lets see how far I can pull away before they catch up? Bit by bit, they were getting quite a way away as I passed walker after walker who congratulated me on leading the race! I honestly didn't think it would last but I was having fun but they didn't come.

Part of me thought for a second that like the Tour de France, the Peloton had mistakenly let me go and I'd pull away to the finish.... but the reality was more like it would probably end in tears! Well it would be a talking point I thought as I'm sure my watch told me 7 minute miles (well it felt like it).

Well this continued past Althorne and up the Creaksea Mountain and soon we were approaching Burnham Marina. I could see the group on the bend behind now so I knew the end was near but rather than accepting defeat, I pushed even harder as I ran along the waterfront. Before long I was making the turn into the CP and everyone was congratulating me but fully focused I simply filled an empty bottle and ran out of the aid station leaving people in my wake.