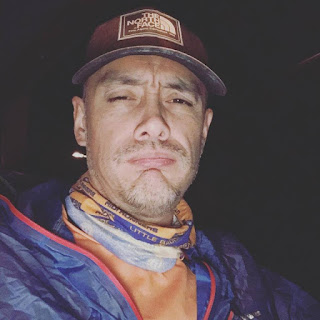 This photo sums up everything about my day


So it's been a while since my last post but I felt I needed to record the events of the day for future reference as for me it was strangely significant.

I'd carried an Achilles injury for most of last year but hadn't stopped as it wasn’t getting any worse but as I finished my last event of 2017 I decided to rest it up and seek some guidance. A few weeks before Christmas I visited a local physio who I knew did Shockwave treatment. This I'd read as a relatively new but effective treatment that could help where traditional methods had failed (apart from lengthy rest which was never going to happen).

He actually didn't say what the issue was specifically apart from there was a great deal of inflammation that was being caused by "something". I was a little uninspired and asked if they could just start Shockwave but he said he needed to seek advice and get back to me. A couple of days later and I got the message that I should start.

By this stage I'd already taken a couple of weeks off rest from running  and the foot was actually feeling ok so what did I do? Yep 20 miles along the Saffron Way with the boys from Little Baddow Ridge Runners! I thought this would be a nice slow jog/walk and a decent test for the ankle. So as we started the obvious feeling was a loss of fitness but I'd expected this and it was almost like I was starting again in my early running days.

Anyway, I thought the run was great but as we approached Danbury and neared my home I decided to call it a day as the Achilles was starting to ache. I'd kind of hoped I wouldn't need to seek further treatment but I got home and booked the first session.

Fast forward, 4 sessions down (and a large hole in my wallet) and there's a noticeable improvement. It's nowhere near fixed but it's a bit better for the first time in months. After another week off and a stone heavier I went out for a couple of short runs and apart hopefully some superficial pain in the foot all was ok.

I'd booked an event in the first week of Jan which was 26 miles. I was going to walk this with Katie originally but she hadn't put the training in as she'd been ill so I decided to jog around with Darren and a couple of his friends who were new to the longer runs. The day went ok but again what I really noticed was the fact I was "hitting the wall" a lot more than usual and more specifically a lot earlier.

I came off that event ok and decided to go ahead with another event the following week, an off-road 50k. Writing this I'm already thinking that a few weeks off and a couple of back to back long events would probably result in a slow pace but the head didn't realise this at the time! I had no idea how to pace this event as if I was on form I would have pushed at the start and tried to hang on but as soon as we started and the people I normally ran with pulled away I knew that wasn't going to happen and settled into by back up plan which was find a decent paced group and let them pull me around.

I saw a guy I'd seen at a few events in the past that I knew was pretty steady and he was running with a couple of others including the current first lady so I tried to keep them in sight and also try and benefit from some opportunity to relax on the navigation and follow them (well you can guess what happens next). Well we reached the first CP at almost 9 miles and I'm feeling great, I followed the group out and took the next left pushing the pace a little to keep together. Well we soon realised that this wasn't correct. We stopped, looked at the instructions had a look around and decided to turn back. It wasn't that bad a delay and it was a silly mistake as the paths were numbered.

At this point alarm bells should have been ringing. The delay had meant I was now running with this group which was nice as we all started to chat about races we'd done and injury's we'd picked up. What I wasn't doing at this time was following the route description close enough and if you do this at a key point you then you can be in trouble. We kept running on this wide track until we saw a runner walking towards us. It was James a guy I knew who said the path ahead just stops at a road that's not on the instructions? At this point we all ran on to see and stopped and looked around. I notice a hidden path off to the right and guide everyone onwards on the correct route but 30 seconds later the path ends and again we are lost.

After another bout of standing around we decided to run back to the last point we knew was correct picking up runners who were making the same mistake. It was then that I saw Andy from my club who jogged up to me, jumped through a fence and ran up a faint path on the hill. I looked at the instructions and sure enough it was all there but we'd missed one sign and then ran in auto pilot. Extra distance and time wasn't what I needed.

It was nice to run with Andy and James for a while but I really wanted to keep my pace up so I stuck with the group I was with and we pulled away. We settle into the pace again but we were still stopping every so often to question turns when if I was on my own I'd probably just keep going and it all adds up on the clock. Coming up to the 2nd CP I was starting to feel significantly tired. I was fueling as much as possible on the run but the legs were getting heavier and I was glad I was in the pack as they pulled me into the stop.

Splash and dash and we were away. It was great to see a number of familiar faces at the CP but we pushed on along the Flitch Way now keeping the pace. This section went on for sometime and now I was really starting to feel it having to stop a couple of times to stretch off. I was still hanging in with the pack though but as I stopped to answer the call of nature I fell off the back of the pack some distance. I pushed as fast as I could but didn't feel I could catch them as I had nothing left. We were at 25 miles and with at least 5 maybe 6 miles to go I was concerned I was going to have to back right off, what I should have been telling myself was this was a dip and I needed to keep pushing through it.

Well I gave it everything I had and upped the pace and managed to catch the group as we reached a farm and crossed multiple fields. The issue now again I was only half following the instructions as I recovered and I was relying on them to make most of the decisions. This is a common issue and no one person is ever at fault as over time everyone will lead the group the wrong way most times and people shouldn't just follow. We got to a section where everyone up front had stopped including some other runners. I overtook them as I realised I'd actually ran this section on another event and they asked did I know where I was going and I confidently answered "of course".

We got to a church, took the path through a hedge opposite and turned left (in hindsight we were already wrong). We got to another section where things weren't adding up completely so we stopped again. We went back to the point we knew was correct which was the path opposite the church gate and we carried on making the direction fit (another rookie move). What I know now was we'd all actually taken the wrong route probably a mile previously but the description led us by coincidence back on track to the church gate but we approached it from the wrong direction and as a result every direction from this point was opposite.

Eventually again we all stopped as things didn't make sense. We were now well off course and looking at the map we could see the next CP in the distance and the main path which took us to it. We managed to quickly get back on course but had lost at least 20 more minutes and ran more bonus miles. We eventually got the the next stop with one more to go and my watch told me I should have finished the race distance now. We quickly refueled for the last push and again we managed to stop and question directions. Eventually we settled into the course and I fell off the group but kept them in sight as I trudged to finish.

Not sure I've ever been so glad for an event to be over. I was pretty frustrated for a number of reasons but actually I got exactly what I deserved and the result wasn't that bad. I think I finished 16th out of 90ish people.

A great event on a good course with nice weather, at least I got my moneys worth!