A couple of weeks of build up and the day had finally arrived that I swore would NEVER happen again! Yes I was running another road marathon…

I’d spent the last couple of weeks also changing the way I fuelled for these type of events. Out went the Nuun Hydration tablets and it was hello to the Coconut Water. I’d got on with Nuun hydration tabs quite well in the past but during the SDW50 I’d found myself too dehydrated post event but I thought I needed to up the dose as I was using one tab per 750ml bottle of water and the recommended dose was one tab per 500.

As you’ve hopefully read previously, after reading various articles on the magical hydration capabilities of Coconuts I thought I’d test it to see if it worked for me especially in anger? I’d been drinking this frequently and also combined it with the Chia Seeds which were supposed to give you some energy at the same time. I guess together they could replace Hydration tabs AND carb gels (fingers crossed).

During the recent spring "heat wave" I’d had reasonable results using the above on various runs with the water leaving me feeling psychologically refreshed if not maybe physically and it was time to put these tests into practice.

One of the key things to anything “home grown” is the preparation! I’d been caught out a couple of times in practice and so I was taking my time to get it right for the race. I’d entered the Halstead marathon only because I had to run that distance for ultra training so thought I’d also test and see how ultra training effected a 26.2 mile road race?

Halstead is a quality event run really well and and also features the capability to supply your own drinks to be put out on the course just like the elite runners do at London etc. I decided to use the same Nestle water bottles from the London Marathon that I’d used in training for this event and modified the spout to support the capability to drink the Chia Seeds without the “clogging issue”. 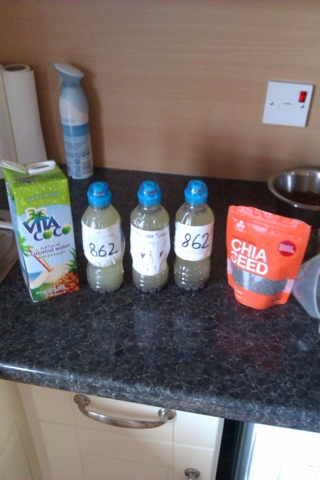 I’d mixed the seeds with the water the night before in order to soak them and allow them to expand which makes them easier to consume during exercise. I’d filled 3 bottles with my magic mixture and labelled them with my race number and also the number of the aid station they were to be placed at (miles 6, 12 and 18). I also decided to use an ultra-marathon trick I’d learnt and filled half a bottle with flat full fat cola for mile 22. I thought if I hit a low at this point, I thought this might help? what’s the worst that could happen?

The final step was to deploy yet another ultra piece of advice I’d been given and asked my 8 year old daughter to design some labels with various good luck messages to me. This hopefully would give me an extra morale boast if feeling low. 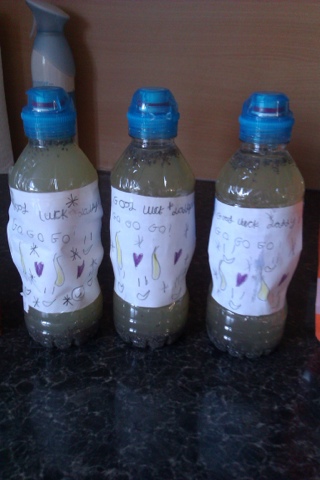 I was picked up by my “other, other half” Mr Andy Hind and we were soon parking up at the race HQ and getting our last minute admin sorted. We dropped our bottles to the collection point for the course (top tip, remember what aid station you placed them at) and I stored my gels that I was going to use (5 in total). At this point I’d like to give another shout out to Andy for his experiment regarding gels. He, like me had found using gels a little “hit or miss” so this race he would be following the manufacturers guide for consumption and was to use 11 during the event (accident waiting to happen?)

Everyone was talking pace during the build up the the start. There were a huge mixed bunch of runners mainly split between “get around and enjoy” to “full speed ahead”. My tactics were quite simple and I’d decided to start as if I was trying to get a sub 4hr time and see how long I could hold that for. It was exactly the same plan I’d used for the last couple of marathons but for some reason I always seemed to “blow up” “at 14 miles on race day.

The race was off and for once the weather looked as if it wouldn’t be scorching as usual and it was actually mild and slightly overcast. I started to settle in on this roller coaster of a course and looked at the watch to see I was running a steady 8:40/min mile pace. I was aware this was a little quicker than expected but I felt ok and if experience taught me anything I’d need that time in the bank later.

By the time I got to the first of my drinks at 6 miles, I was feeling slightly guilty to everyone I told on the start line that this course was actually flat with only a couple of climbs as that was a blatant lie! Not on purpose honestly but “roller-coaster” sums this race up for me physically and later I’d find emotionally. I grabbed my bottle from the aid station crew (great volunteers including a large amount of air cadets) and the different taste to plain water was a welcome distraction. I wasn’t too sure about how I’d handle the chia seeds during a race but they weren’t actually that bad despite the comments from the crew members on how it looked! 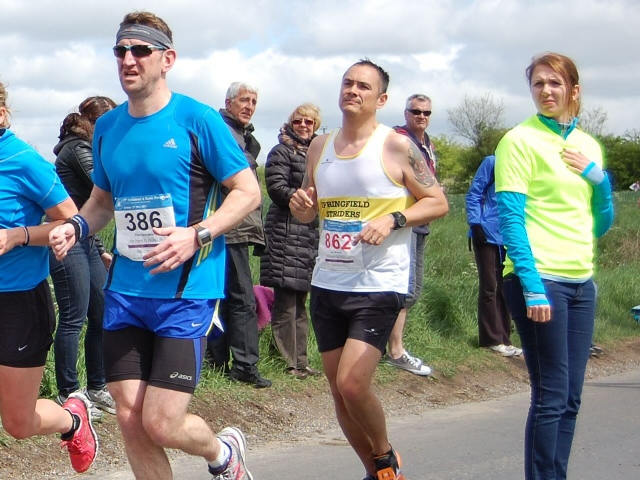 By 12 miles I was coming up to the dreaded halfway point and also my second drink on the course. I was still feeling ok at this time and I was even passing a few people that I’d normally be behind (everyone was obviously on different plans and many had also done back-to-back long runs). I was careful not to start celebrating too soon as I’d been here before and the wheels well and truly fell off.

I got the point in the course where you turn left for the second lap or right for the finish and by the crossover point on this figure of eight course I was still feeling reasonable especially and there was great support from fellow club members and Fetchies from the Fetch Everyone social running site. As I approached the biggest hill on the course for the second time, the weather was starting to warm up and I was finally starting to get that familiar feeling where the energy slows starts to fade and things become hard.

The battle for a sub 4hr marathon had begun. I wouldn't let myself walk at any time! to me that was simple. I’d given enough advice to people recently including my daughter and wife and said the key to running was the transition point from walking so I felt I’d be a hypocrite if I did it now but I was slowing more and more. I kept asking myself how could the same road I was running earlier so easily now feel so hard? By now I’d had to look almost continuously at the bottle in my hand and at the message my daughter had written “Well done Daddy”, well I was "done" alright, down but not quite out. 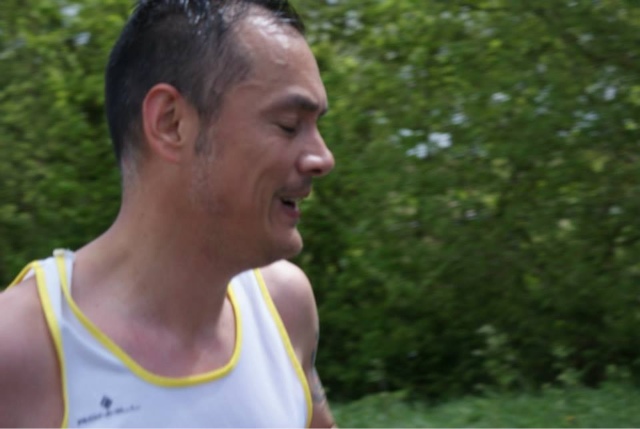 Still I trudged onwards running from mile marker to mile marker noticing that the time between them was increasing combined with the fact that the people I’d run with for hours had one-by-one left me and I now seemed like the only person running. I got to the 18 mile point and things were starting to really get to me. This was the point where I picked up my last chia bottle and I realised I still had half a bottle on me despite me sipping all the way around. I felt like throwing the bottle at the smiling aid station staff at this point as I was a little sick with coconut water, chia seeds and defiantly sick of running! (actually the drink wasn't even that bad). Reading this back now, I think how stupid I was compared to people that really have serious things to worry about.

In my head I was now on my hands and knees and I was waiting for Andy and the rest of the crew to come flying past but then by some form of miracle noticed I was still catching up people I’d normally finish well behind so it looked like we were all in the same battle, maybe things weren’t as bad as I thought? I decided to just keep moving until I reached my last bottle at around the 22 mile point where I deployed my last secret weapon, time to deploy the cola! This had worked for me on the SDW50 and all I needed as I little kick to keep me going, 8:40’s were now history and I was now averaging 8:55’s and any slower and the goal was gone.

As I approached the crossroads on the course where the Striders were camped out in force, I actually got to a metaphorical “crossroads” in the race :) I noticed I could probably back off now as I was close enough to the finish to get a PB (a good result on this course) or keep I could keep pushing? As I saw the Striders for the last time I made my mind up to give it everything I could. I then looked at the watch with a mile to go and I had just over 15 minutes left so in theory I could fast walked to a sub 4 finish and it was at this point that I allowed myself a little sigh of relief.

I got to the road where the finish was and I still didn’t know for sure if I truly was going to get the time I was after as I’d not looked at elapsed time on the Suunto watch and I asked myself "was my pace correct?" I took the last sharp turn left into the finish line and I could see the clock as I passed under 3 hrs 55 minutes!

I almost cried as I finished and still didn’t believe it until a good friend came over and congratulated me breaking this milestone. I was totally spent with almost nothing left but felt on top of the world. I’d waited 4 years to beat my PB and I’d also managed to break the magical 4 hr mark at the same time. I understand some people will read this and think sub-4 isn’t actually quick but remember I don’t do any specific marathon training or any real speed work and everything I do is now geared towards long off-road so everything is an experiment.

Had the chia seeds and coconut water worked? Well I never “hit the wall” and the lull I felt was manageable today so I honestly think it did help. Next time out I’ll start weaning myself off gels and see what happens with that?