Today I decided I didn't have loads of time so thought I'd make the best out of the time I had and would try a short barefoot run.

I made the choice to run down to Chelmer Park where we hold the Barefoot Beginners sessions. First I put on my Xero sandals but this time thought I'd test out wearing normal socks with them as it was winter and still chilly. Ok the decision was a little "tongue in cheek" and I have to admit a part of me liked the fact people would comment.

Actually the result wasn't too bad. The socks actually fitted well and this would also serve to stop any chaffing too. My daughter loved the look but I don't think the wife will be volunteering to run with me any time soon. 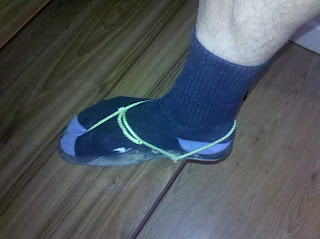 I hadn't run in the Xero's for a few weeks and they felt hard going at first but as I warmed up I got used to them again. After a mile I'd got to the park and took the sandals and socks off to run the first section which is approx. 2 thirds of a mile of grass. The ground was soft but still really cold and the feet were taking time to adjust. Yes the going was easier on the feet but I still had to be careful of twigs etc. from the many trees and I noticed for the first time that I did actively chose my route "on the run".

I got to the Tarmac path and straight away the feet felt like they were burning when running on it. I think a combination of temperature and pebbled finish made the run hard work. I got to the end of that section and decided to put the Xero's back on and run home. I ran half the way home and got to a piece of path that was smooth and flat. Again I took off the sandals and straight away it felt right. My feet were well warmed and the ground though hard, felt warm? Strange how different hard surfaces can feel.

As I began the last section home I noticed also that I was trying to run light on my feet as if I was running on a hot surface protecting the feet, I do think I need to let go of that habit and get used to the feeling. Anyway I was happy with the short barefoot run out especially as I analysed so much.

So what's next? I'm planning my next long run and I've got a route in mind which is a homage to my youth as I plan to run the old disused railway line between Witham and South Woodham Ferrers via Maldon in Essex where I grew up. That's 15 miles but I also planned to run from home to the start in Witham which is an extra 10 miles. After finishing I aim to get the bus home :)

Well I'm also trying to incorporate the lessons learnt from my last long run. I've brought some cereal and chocolate bars and will fill my flask so will will have lunch as I go, so we'll see how it goes?