Last time out all the PoS runners had just all boarded the "fun bus", destination.... God knows! but in James we trust?

When I say "race ready" I mean it as in minutes my bladder was reminding me of just how well I'd hydrated pre-race! I'm sure this was all part of the plan though but with all of us in the same boat, things could get messy!

We were now all joking about possible destinations and morale was still high but as we left the countryside and approached the M4 the jokes slowed for a moment as we joined the motorway and we read the sign "South Wales"... This sh!t just got real!

Well we were over an hour into the race and we had even broken a sweat yet. As we got further from the start I commented that it was guaranteed to be a long race, I think it was PoS vet Sam Robson who said it would be James Adams's style to drive us 200 miles away then stop the race after just a mile! Was this RD really that warped?

After what seemed like an age we turned off the M4 and we were approaching the Cotswold Way (gulp). We passed that though and we drove past Bath Horse Racing track with James Elson laughing "had anyone done a multi-lap event?"

But soon we pulled up and this was it (again). We were told to get out and after yet another race briefing (which I missed most of as I was just about to wet myself), we were handed yet another set of maps covering the Bath and Bristol Railway (disused).

We were then off but the only thing I was interested in was diving into the bushes to answer the call. As I started to settle into a steady pace is was quite funny and kind of fitting to the spirit of the event watching everyone one-by-one dive into the hedge too!

I briefly looked again at the map to make sure that the route was indeed sticking to the wide old railway line for the next few miles so I could concentrate on the run itself rather than the navigation "this was going to be easy" and if anything maybe a little boring as the long gone train tracks were replaced with tarmac and we might as well been running a road race.

I was probably mid pack when I saw the runner in front come to a halt in the distance? Confused I approached a couple of people and one was James Elson. "well done mate" he said as I ground to a halt. He took the map off me and told me that was it!

I couldn't believe it! Sam was only right and I didn't know whether to laugh or cry as we'd only covered a couple of miles!

But James laughed as he produced yet another map and pointed out another route following a river and canel eventually into the town of Bath. The route took us off road and back in the direction we'd just minutes come from.

As I ran I looked again at the map which wasn't the usual OS variety but what I'd describe as a tourist map. I quickly noted that we simply had to follow the water the whole way into town and I could even see another runner in front so once again I put the map away and relaxed (big mistake).

Well as the river twisted and turned the runner in front would disappear every now and reappear then and as I ran under the railway line that we were on earlier and into a field I noticed he'd gone again but thought he must be around the corner as I followed the river still so I must be ok?

I reached a small village and the river seemed to disappear now along with everyone else. Alarm bells should have been sounding by now and I eventually decided to look at the map! IDIOT Ian, you guessed it, the reason the guy in front had vanished was because he'd crossed the river at the railway line.

Well I had a decision to make. Go way back to the point I'd gone wrong or maybe there was another option? I looked at the map and the first thing I noted was I wasn't lost. Actually I could see the other side of the water were I was supposed to be so took the decision to head onwards until I could find a place to cross and I could see I hadn't missed a CP.

I'd lost quite a bit time by now and I honestly wondered if I'd even ever see my fellow Stringers again but as quick as I'd said that to myself I saw my team mates on the other side. It was again slightly strange running along the water waving to each other but it wasn't long before we were reunited even though I'd lost time and positions.

A large portion of the posse were together again and we we're about to embark on an adventure that would leave its mark on us forever! 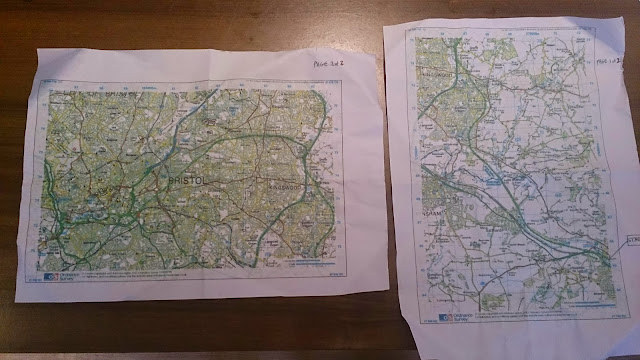