After weeks of build up the day was finally here and as I left the comfort of my good friend Andy Hind's car the darkness was broke by the heavens opening... great!

I felt my prep had been ok but I knew it was going to be hard as I'd not done loads of long runs beyond 20 miles but I has happy that if I could get to the halfway point of the Grand Union Canal in a half decent time I could at worst walk the second half and still get in with an hour to spare inside the cut off time of 11 hours. 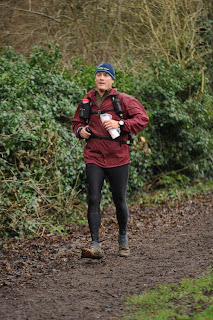 I sat down in the corner of the large pub which was acting as the race HQ and registered with ease as I'd got there early. Soon another runner joined me and as we both got ready he said he'd run this many times and that it was a decent event, he even got me a coffee as it was my first time. He said that the hardest part was probably navigation and he was using a handheld Garmin with the route on a OS map. I'm not 100% sure this is the "done thing " on all these events but there was a large number of people doing the same thing so I didn't feel to bad that I had the route on my Suunto Ambit GPS watch as a back up.

Soon the pub was packed and it was standing room only. There were 250 people running and for some reason a large part of them had decided to arrive last minute to register. The race organisers had warned they would delay the start if the train was delayed so we didn't actually start until almost 08:45, 15 mins late but I wasn't in too much of a hurry..

Kit wise I'd opted to wear my Children's Trust wicking tshirt as that was the charity I was running for. Over this I chose a long sleeve thicker Keela shirt which is a great bit of kit especially as it has a zipped neck so you can adjust for temperature control, finally as the weather wasn't looking too clever I wore my basic Arktis Pertex wind proof.

On the bottom I wore a cheap pair of Decathlon running tights, Hilly socks, New Balance MT110 minimal shoes and decided to test to Inov-8 ankle gaiters I'd had for some time but never used. I decided to give these a try as I didn't want to get debris in the trainers on such a long run and they proved to be superb.

I'd brought a new bumbag to use on the event but at the last minute decided to go with my Inov-8 Race pack 12 as I'd used this many times without fail plus for my first real ultra unsupported I'd rather have too much spare kit than too little. I carried a full waterproof jacket, trousers, warm layer and some spare sock just in case.

One of the key decisions was fuelling. As the checkpoints provided gels, I didn't carry any but maybe in hindsight I should have just in case? I did though carry some spare food but didnt use it. Hydration strategy was carry a single bottle in a carrier on my shoulder strap, this way I could refil at every CP and use the Nuun tabs as required. Again this Inov-8 product was new and untested over distance but I liked the idea like so much, I just went with it and was proved right as it was perfect.

As we started, I hung back not wanting to push too fast at the start and we soon came to a halt at the first on many barriers along the way. As we left town and started cross country along the Chiltern Hills, the ground was pure wet sticky mud. I'd started exactly as I wanted well within myself but not too slow. At one point I ran with a Belgium chap who was experienced in ultras and I told him that this was my first long distance race, he asked what my marathon times were so I told him, he said I was mad to be running this pace :)

All was going to plan as we approached CP 1. Then the worst happened.... I was getting ready to walk a steep section which was really slippery when I lost my footing and next thing I was airborne. Lucky for me I fell back and landed on the fattest part of my body. I went down hard but no harm done so wiped myself down and carried on.

After the CP we then ran through a large town and then once again through the Chiltern Hills with more mud galore. It seemed like ages before I approached CP 2 at 17.5 miles. The legs were starting to feel a little heavy but I saw a familiar figure in the distance, it was Jerome, the chap who I'd met at the pub before the start, it was nice to see him again and after a few minutes I jogged off with the M25 just around the corner.

Like many people in long races, I'd set a few mental goals that I could tick off as I ran. The first major landmark was the London Orbital Motorway, this meant that 20 miles was too far. Soon I'd passed the 20 mark and I bumped into into a couple of young guys I'd been talking to earlier on route. They were in the Territorial Army in the HAC preparing for their Patrols course soon in Brecon. They seemed to be running ok but just to illustrate how hard it was to navigate the course at times, I overtook them slowly at one point then turned back and they were nowhere to be seen?

As I said I'd put the route on my GPS watch but was nervous to try it as I'd only tested once on a short route which I actually knew so not the best test. Well I started the nav option on the watch and have admit the bread crumb option was awesome. I'd used my online mapping software prior to the race to create a route then imported it onto the watch. The option I was using shows a simple route line for the next couple of km so you can see major route changes that need to be taken in advance or even if your starting to head off track and this was proving to be really useful.

Well soon we approached the biggest landmark on the whole course.... The Grand Union Canal. This marked 22 miles gone and according to my plan I aimed to get to this point in 4 hours and worst case walk the rest at 15/min miles if the legs had gone. The time was 4:08 so a little slower but the going so far was difficult so just happy to be close to that time.

With this morale booster I decided to keep running and pushed on to CP 3 of 5. This dragged on for what seemed like ages with the route proving quite boring and I actually missed the rolling hills and mud and all I could of think of was how my heavy legs felt. The next CP was at marathon distance and promised savoury food and as I approached it I was eager to see what they had on offer? Well after a pork pie and sausage roll I walked from the CP and began to decided now to run/walk like many of the people seemed to be doing now.

Eventually I got to CP 4 and was told that we should pair up as it was going to get dark soon. By now I'd got to 32 miles and I my legs were feeling like lead and I just couldn't move them fast enough, I got to about 35 miles when I met another competitor who was fast walking so I stopped for a chat. He had actually walked all the way along the canal as his knee had gone but was still moving pretty fast.

As we approached CP 5 at 38 miles I decided that I'd walk the rest as everytime I tried to run the knees were hurting now and especially as I was well ahead of schedule! I was having a really good chat with the other runner who was strangely was called Ian too and soon the head torch was on and eventually we approached a lady in the dark who shouted 200m to go! Well you can't finish walking can you and we started running again. This got me thinking I should have pushed it a little more? 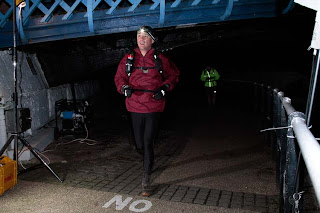 Well we crossed the line and that was the end of my first full ultra adventure. I'd planned for a worst case time of under 10 hours and I finished in a time of 8:51:22.

A day later I'm thinking if I'd stopped a little longer at the later CPs and eaten some real food I'd been able to push further with more fuel as I hit the wall around 35 miles? also I think mentally I took it slightly easy later on the canal section probably because I knew I was well inside my target time I set at the start. Generally I'm really happy especially as I finished 180th out of 250, 57th in my category.